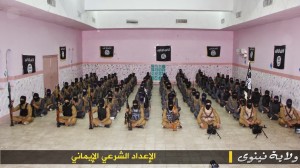 [1]Romano Prodi: terrorism in Sinai and in Sahel is no less dangerous than in Irak. It must be answered with an international strategy

There is still an open dialogue with Europe in search of a strategy to counter terrorism in the region, in light of the coordination led by Egypt in the Mediterranean. Finally, the first step came with the announcement of the Egyptian Italian participation [3] against terrorism during the visit by President Sisi.

In an interview for “Al-Ahram” over the phone, Romano Prodi, former United Nations envoy to the Sahel, reveals that the level of the threat require to move upwards the scale of the risk.

Prodi is one of the most influential international figures on the scene by virtue of its current location, as well as his former job positions. Previously, he served as Chairman of the Council of Ministers in Italy, and was appointed President of the European Commission. A dialogue between him and President Abdel Fattah Sisi [4] took place in July over the phone, in the framework of international coordination on the Libyan situation.

How can the Egyptian-Italian convergence be effective in addressing the crises the region, particularly terrorism?

”I think that terrorism has changed [5] in quality. We have to be very careful against terrorism in Iraq and Syria [6], or it may extend to the surrounding areas [7] and become a greater threat, and this of course affects Italy [8] itself. I think we have to work together to apply progresses in economy [9] and raise living standards for all peoples of the region. There should be a reaction to stop the spread of terrorism, at the same time with the development of society”.

Do you think that there is still a chance to combat terrorism in Libya [10]?

”As far as Libya is concerned, there should be a broad agreement among the various forces in the battlefield. Since a nation with two governments and many armed forces cannot exist. This is a kind of chaos. The problem is not only to take action against terrorism, but also to re-build a new Libya [11]. I emphasize here the importance of the role of Egypt and Algeria. There is a task for Egypt and Algeria [12] which is very important, and that task can’t be fulfilled by Europe or by the United States or by other powers only. There is a need to develop a real initiative with the contribution of these two important countries by virtue of their presence in the region. In this case; military operations alone can never be enough. Military operations may help, but the problem lies in building a society that includes all sects”.

Three years ago, did you think that the Arab Spring would become what it has become?

Are you satisfied with the European role in the Mediterranean [15]?

Egypt is involved in a fierce war against terrorism in the Sinai region, what support could be provided [18] by the international community to Cairo?

”This is one of the main risks that we are facing now. Everyone is talking about terrorism in Iraq, but there are two other important fronts [19] where we must fight terrorism. Namely, the Sinai and the African Sahel. The situation in these areas is no less dangerous than that in Iraq. Terrorism is no longer a local terrorism, but an international terrorism [20]. This difference is becomes evident when we compare the current situation to events that took place before. The terrorism threat now is no longer limited to countries where it is already evident. Since terrorism is an international threat [21], it must be answered with an international strategy [22]”.