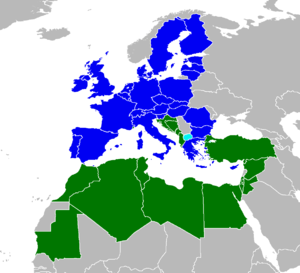 ENERGY AS A VECTOR FOR SUSTAINABLE GROWTH AND REGIONAL INTEGRATION.

“ENERGY AT THE MEDITERRANEAN: SUSTAINABLE GROWTH AND REGIONAL HARMONIZATION”

Already  fifteen years ago,  here in Barcelona, at the  EuroMediterranean Conference, cooperation in Energy has been  a central issue .

Energy was seen as a possible important engine  to move toward a  more balanced cooperation in industry and technology,  and raised many hopes of mutual benefits.   These hopes have only in part been   achieved.

Of course, among the many flows of goods, services and people,  between the southern and the northern rims   of   the Mediterranean sea , that of Energy is  one of the most significant .The EU depends from  Mediterranean Energy exporting countries for 36 % of its gas and 20% of its oil, and  from the point of view of producing countries EU gets 86% of the gas exported  and 49 % of the oil.

But the flow of energy south to north and that of money from north to south has not resulted in a balanced cooperation in the whole   Energy system, as it had   been   hoped .  This has some how limited development and growth   of the whole southern Mediterranean area.

The consumption of Energy pro capita in the north in fact is still between 5 and 10 times higher then in the south.

An insufficient Infrastructure for   distribution and transport of energy, and an inadequate integration of networks,   are still  a  main constraints to the localization of new industries and services  in the southern areas.

One of the reasons behind this situation is that not enough attention has been given to the creation of industrial ,technological and scientific capacity in the area .

The three long and challenging gas pipelines Transmed ( gas from  Algeria  and  Lbia), GME (Magreb, Europa ), Greenstreem ( Libia), and Medgaz (Algeria to Europe)   have  been built mainly with turn key contracts which did not contribute much to the growth of know   in the Sothern Rim.

The construction of new energy   infrastructures  goes on thanks to an almost exclusive flow of  systems and components from the north with very little technology transfer.   It could have started instead a positive collaboration creating a new industrial base.

But it   is still  possible to improve, although time to do it is limited.

The southern Mediterranean area has good reserves of oil and gas  but not very large ( 5% of the total worldwide compared to 65%  in middle east ).

In the Mediterranean area, as a whole   ,there will be a shift in the contribution to the total  demand from different energy sources in the next ten years  .

In this scenario it is not   yet considered here the relevant possible contribution   of energy from wind ( Morocco ,    Tunisia, Egypt and Turkey ) and sun (the southern Mediterranean area has  the highest potential in the world in terms of exposure and meteorological conditions).         Especially in the case of solar energy a revolution will surely happen very close as soon as   the   breakthrough now in the pipeline of technological development will be industrialized.

Nor   it is yet in the picture the option that energy   is exported not in form of primary source, but   as electricity produced in the southern countries.

It is important to realize also that, accounting for their internal growth   and for the changes in production capacity, Egypt and Syria will become importers from exporters  , while Libya and Algeria will be able to significantly increase their export.

In this picture there are three  possible strategic lines of action,  to make of energy a relevant factor in a fruitful and deeper cooperation in the Mediterranean area.

A. Better integration of southern capabilities in the design, financing and construction of the next generation of large infrastructures related to Gas

B. Improvements in the  harmonization  of  regulations on Electrical Energy  among EU and the other Mediterranean countries.

C. Joint development of large projects for the utilization of  renewable energies (especially solar)  to produce electricity and  desalinate  the sea water.

A. Large infrastructures for Gas.

New projects such as and Galsi ( pipeline from Algeria to Italy through Sardinia), the  set of  GNL terminals in Egypt , or  the ambitious design to bring north to Algeria the Nigerian Gas,  promoted by NEPAD (New Partnership for Afican Development) Should be seen from the very beginning as opportunities for development   of Southern Mediterranean Countries.

Starting from the financing phase the Europen Bank for Investments , which since Barcelona 1995  hag been in charge of favoring projects mutually beneficial, should ask a larger involvement of industrial capacity from Southern Mediterranean Countries  then in the past.

Very important in this direction is the political support of the European Union and of the Governments in the Region.

B .  Harmonisation  of regulations for Electricity.

The development of a much larger system for producing , tansporting and distributing electricity is crucial to the development of the Region. On the basis of estimates by  OME  (the Mediterranean Observatory for Energy ) the Invesments required  up to 2020 are around 250 billion euros  .

The Governments in the area have acted to attract foreign capital , but , up to now the Independent Power Projects have not been successful enough and the burden for development is mainly on local state owned companies .

However the integration of the electricity systems between North and South has anyway a high potential and may create the condition for new fruitful investments in the field.

The creation of a Euro-Magreb  market for electricity        ( Rome declaration December 2003 )  offers the opportunity to optimize the utilization of the primary energy resources in the Magreb with a local production of electricity to be transported and distributed in the EU through new power lines across the Mediterranean..

Less problems of Power Plants Localization, Technology Tranfer, more electricity in the south for local use , would all be clear benefits along this line.

All of this requires a framework of coordination of the different national systems  in  order to offer to each operator the freedom to develop his own system within commonly agreed rules.

Along this same line a deeper dialogue with the South ,  when European Union principles are declared and directives issued , could be very beneficial.

The fastest growing industrial sector has been that of solar cells production  and installation.

And still the local situation   in terms of solar exposure and meteorological conditions is much better in the South Mediterranean Countries  then any where else in the word.

The opportunity for a fast and strong   development of solar energy in this large area is definitely relevant  as soon as the new technologies will allow it to reach te so called ‘grid parity’ (cost of energy produced equal to that of the energy in the network). And here the grid parity will be already reched at costs of the  solar power installations 40% higher then for example in Germany.

The benefits would be huge:

– extremely  low impact on environment in terms  of CO2 emissions

– much  lower need of investment for local distribution of electricity because of possible grass root localization of small plants . Remote areas would have energy with no need of power lines.

– Possible utilization of use of direct solar energy to desalinate large quantities of water helping to solve one of the problems of the area without CO2 emission .

– Great opportunity to develop a local industry for production and installation of solar power plants . The mass market would in fact start in this part of the world much before anywhere else thanks to better exposure and meteo.

This is why projects like Desertec or Solar Plan  and others described here, may sound  ambitious now, because of the still high cost of solar power, but may become very realistic much sooner than we think.

The first is a very concrete effort to use energy not only as a tradable  good , but as a direct agent of cooperation in the Mediterranean  and of accelerated development in the Southern Countries .

The second is the need for a large source of financing of solid, long term project with a strong industrial participation  of the South.

The whole Area,  therefore, would highly benefit from the existence of a financial institution fully dedicated to support these  huge investments .

These are moments of special suffering of the developing countries from the global crisis  and he need for direct support is greater then ever.

The old idea of a EuroMediterranean Bank  would have strong new reasons to to be  brought to light again.