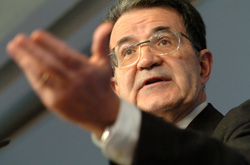 The objective of the Foundation for Worldwide Cooperation  is to  ‘ face social , cultural, political issues in the world’ , developing and  offering new proposals of cooperation in the International context.

The Foundation  starts its  initiatives from the European Union,  a major player in the effort to promote a multipolar world,  where also new protagonists such as  China, India,  large South American and African Counties , will share more and more the responsibility for a peaceful and prosperous world.

Europe not only will  be  the natural link with the ‘ring of friends’ East of  its present borders,  and South in the Mediterranean area  ,  but also with Africa as a whole and   with the far East.

The Foundation has been created by President Romano Prodi ,after leaving office as Italian Prime Minister , in June 2008 and is funded mainly by donations and contribution to specific projects.

It  has already started initiatives in :

These and other initiatives are open to the contribution of ideas and resources to all those who might be interested.